Is this the greatest ad campaign ever? 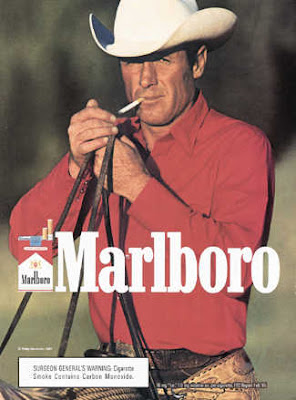 You can quibble about the aesthetics (and hiss at the product itself), but impact of Leo Burnett's ads and TV commercials can't really be overstated; it may not be the greatest ad campaign ever, but it's easily the greatest product re-positioning in history. Tying the product to iconic images of the American West and the rugged individualism of the cowboy was an inspiration, but perhaps an obvious one; after all, the campaign was created at the height of TV's cowboy craze.
But in all likelihood, no one at the time probably realized how long-running and resilient the campaign would prove to be.  In fact, as the campaign evolved through the '60s, with cinematic photography and the epic sweep of Elmer Bernstein's theme from "The Magnificent Seven," it only grew in power and imperviousness.  Even as the dangers of smoking grew in awareness, along with the size of the Surgeon General's warning, the always silent, manly cowboy seemed to belay the seriousness of the risk.  After the government barred cigarette advertising from the airwaves, and many brands stumbled, Marlboro's simple imagery transferred easily to billboards and ads. 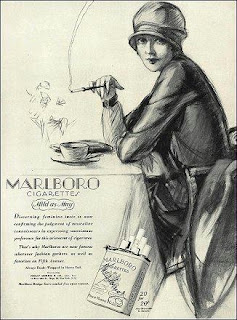 And though the cowboy genre itself never regained its 1950s-level of popularity, the campaign's depiction of the idealized male gave it a lasting appeal that transcended the genre.
But appreciating the real brilliance of the campaign comes from understanding the brand before the Marlboro Cowboy. Because it was about a far from a "manly" brand as you could get; in fact, it was a British brand that had been marketed to females.   And in fact, the filter that was recently added to Marlboros only added to its feminine qualities (by the standards of the era).
Imagine someone trying to give Virginia Slims a male image and you'll have some idea of the immensity of Leo Burnett's accomplishment.
Below is a sampling of some Marlboro spots of the '60s and '70s, with the unforgettable Marlboro theme. (Apologies to Mr. Bernstein, but at this point, it's surely more identified with the cigarette than than the movie he composed it for.)