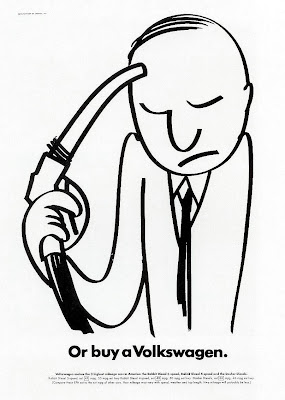 Advertising creative people like to say the idea is everything, but we know how much ideas succeed or fail by their execution.  There are so many variables to consider in producing any ad or commercial.  Yes, some of them end up being just creative preference, but often, these decisions can greatly impact the effectiveness of the communication.
Consider this simple ad from Volkswagon, run during the oil shortages in 1980.  The writer and art director had a concept.  They had a headline.  The question was, how best to illustrate it? They could have hired a professional illustrator.   They could have hired a photographer and shot a picture.  But instead, seeing something compelling in the art director's drawing, they went right from his sketchpad to the layout.
Would the ad still have worked with a photo or professional illustration?  Probably.  Would it have worked as well? Probably not.  The looseness of the drawing gives it an immediacy that the other techniques wouldn't provide along with a strong sense of empathy and (comic) desperation.
Or maybe it's just poetic justice:  Many clients, when presented rough layouts by their agencies, would then ask why they'd have to pay for photos or illustrations when the picture is already right there on the layout.   In this case, anyway, they'd be right.
Ads