February 22, 2008
Every once in a while, the right brand appears at just the right time, when larger events in the world or culture add a special resonance to a product.  To me, they're "Zeitgeist Brands" -- after the German word that translates to "spirit of the age." It's one of the most powerful marketing tools available, but almost by definition, it's one of the most unpredictable.  Hard to create and usually impossible to duplicate.
Sometimes it happens by accident, but it can be planned, too.  Apple's 1984 TV spot, for example, played off the cultural fascination with reaching the titular year of Aldous Huxley's dystopian novel.  But that was less about branding and more about making an introductory splash; although it helped create the Macintosh computer's image of a user-friendly device, the spot was a single-event phenomenon. 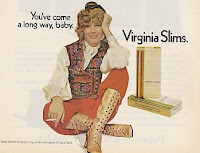 Here's a better example. In 1968, Phillip Morris introduced Virginia Slims, a spinoff of their Benson & Hedges brand. If you are what you smoke, this slimmer, longer cigarette was about as aspirational as you could get when marketing to young, professional women.
But it was the advertising campaign that really cemented the bond between the smoker and the smoked.  The pros at Leo Burnett -- the same people who indelibly linked Marlboro cigarettes to male ruggedness and independence -- now worked similar magic with Virginia Slims.  This time, instead of finding inspiration in the American West, they looked to America Now -- specifically the women's liberation movement that was growing in society and awareness by the media.   Its messages of emancipation, equality and empowerment -- leavened with humor and contemporary stylishness -- were epitomized by its slogan. "You've come a long way, baby." in fact, it became a cultural catch phrase, as the ads and commercials found themselves as one of the most visible presences (albeit a safe, non-threatening presence, if you discount the tar and nicotine) of the women's movement.
As perhaps the fate of any product so closely aligned with a cultural movement, Virginia Slims would follow roughly the same arc.  After growing in market share throughout the 1970s, Virginia Slims started receding in the late '80s in the face of new competition from the new Capri and Misty cigarette -- brands now more in sync with the focus on sex appeal and sexual power that had become the new expression of independence for young women.

UPDATE 5/2: Welcome visitors from Digg. I write every weekday about ads and advertising, but with the goal of being informative and especially entertaining to a general audience. If you like what you've read, here are some other posts that you might enjoy:
I discuss another Zeitgeist Brand here.
Who's the father of modern advertising? Is it him or him?
You know about "Got Milk?" but do you know "Got Mink?"
See how the 1960s counter-culture influenced advertising here, here and here.
Here's how "Jaws II" was actually more influential than the original "Jaws."
Read about Advertising Minimalism here and here.
What's the big Superbowl commercial that Apple just hopes you've forgotten?
Ads Culture

Anonymous said…
Sometimes it happens by accident, but it can be planned, too. Apple's 1984 TV spot, for example, played off the cultural fascination with reaching the titular year of Aldous Huxley's dystopian novel.