Computer chip on its shoulder 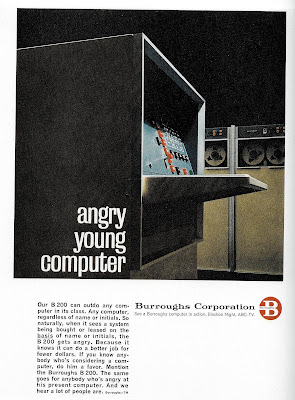 For those of you who think the generation gap-tinged clashes between computer companies are a relatively recent phenomenon, this 1963 ad says "forget it, man!"
Burroughs Corporation was always a distant second to IBM, which probably did give them a bit of a defensive posture and the attitude of a young upstart. The headline plays off the so-called "Angry Young Men" films of the early '60s, socially conscious British films centered on working-class protagonists.
But it's really an old codger just playing the part of a young whippersnapper. Burroughs actually began life back in 1886, selling adding machines until it got into computers around 1953. So by the time this ad ran, this "angry young" company was about 77 years old, actually two years older than IBM. Burroughs finally cashed in its computer chips in 1986, merging with the Sperry Corporation to form Unisys.
Ads