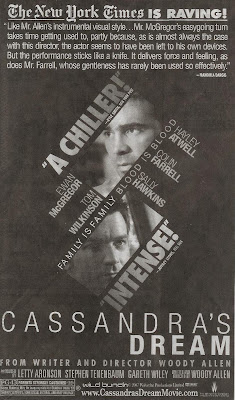 At first glance, there's nothing special about the movie ad above (I can't vouch for the movie itself, either; I haven't seen it). The usual mashup of star closeups, an intriguing line of ad copy ("Family is family. Blood is blood.") and lots of gushing blurbs -- "Intense!" "A Chiller!" -- topped off by the near-hysterical headline, "The New York Times IS RAVING! and five lines excerpted from its review. A bit excessive, sure, but still pretty commonplace in movie ads.
If anything is really surprising about this ad, it's the sentence under the title, identifying this as a Woody Allen film. Yes, Woody Allen, the long-time favorite of the critics, the art-house crowd, and occasionally mass audiences -- and that's really the problem. 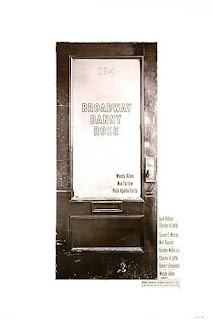 Through the late '70s, throughout the '80's and into the early '90s, Woody has had a special place in the American cinema; in a sense, he was his own brand; though the content of his movies varied picture to picture -- from romantic comedy to family drama to farce to sex comedy to pseudo-documentary to heartfelt nostalgia -- it was the Woody Allen name that was the true draw at the box office.
Every once in a while, he would find himself with a crossover hit on this hands -- "Hannah & Her Sisters," "Crimes & Misdemeanors" -- but more often than not, his movies were considered by studios and distributors almost as a loss-leader. It was the prestige of having Woody Allen in your stable that mattered, not the revenues his relatively inexpensive movie brought in. 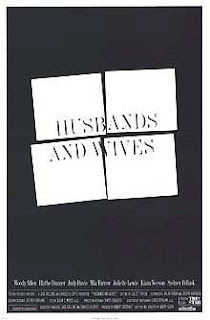 Accordingly, Woody Allen's movies were released with less fanfare and little of the bombast that accompanied mainstream movies. The ads and posters were usually much more spare and graphic, often sacrificing star power for symbolism. Think of the battered office door with "Broadway Danny Rose" lettered on the glass. The fractured title of "Husbands and Wives." The chameleon-like typefaces of "Zelig." Most movie posters are considered art (small "a"); Woody's tended more toward Art (capital "a").
Then...things changed. A combination of factors, really -- the public messiness of his personal life; a merry-go-round of changing studios; a few too many movies that just didn't connect with anyone, even critics; even the aging of his fan base, who didn't get out to movies as often anymore -- and by the mid '90s, Woody's movies weren't reliably drawing even the modest crowds that they used to. To the increasingly competitive and bottom-line industry, the brand was weakening; even their returns of critical acclaim were diminishing. 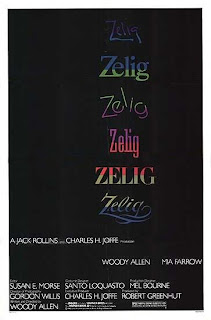 Woody, as you'd expect, has stayed relatively immune to these changes, still writing and directing movies based on his interests and whims. The marketing however, has changed quite a bit. By the time "Anything Else?" was released in 2003, a new kind of advertising was in place for this film and his future efforts. Whereas Woody Allen's name used to be the main selling point of his movies (despite never being featured prominently), now his mention seems almost an afterthought, with splashier, more conventional images of the stars now competing for attention. If you saw "Match Point," his biggest hit in years, you could have gotten all the way into the theatre before you even realized it was a Woody Allen movie. And after the disappointing performance of his followup film, "Scoop," the studio ratcheted up the hard-sell even more for "Cassandra's Dream." (Not that it seems to have helped.)
Maybe it's not unfair that Woody Allen's movies should be judged on their own merits, not their pedigree. (Even Steven Spielberg doesn't get that pass.) But still, for someone around during Woody's critical (and box office) heyday, there's something sad about seeing his movies advertised in such a pedestrian fashion. It's like seeing a used car dealer on TV hawking a Mercedes.
Marketing Movies

Ad Broad, oldest working writer in advertising said…
Nice post, Craig. As a longtime fan & transplant to NY, I never understood why his stuff didn't play in Peoria. No doubt why my films are of the 30 second variety.
March 2, 2008 at 9:05 AM

Craig McNamara said…
I don't have any numbers to back this up, but I always thought his films played about as well in Minneapolis as anywhere. Remember how his upcoming films were always first reported as "Untitled Woody Allen Film" -- and that's all it took to get his fan base (including me) salivating. Sadly, I do think his audience problems began with the revelation of his romantic problems. Not only did it set the cause of psychiatry back a bit, it didn't do anything for the personal appeal that was always underlying his films, especially when the news coincided with the queasily similar themes in his current movie, "Husbands and Wives" (one of his best, ironically). Between that and his upcoming films, which retreated too often into odd exercises into form ("Everybody Says I Love You," "Curse of the Jade Scorpion") and venting against society ("Deconstructing Harry," "Celebrity"), I think he just "broke his brand." As long as he keeps working, I'm sure he'll have other hits like "Match Point," but I suspect, as a cultural "band name", his time is over.
March 4, 2008 at 1:12 PM