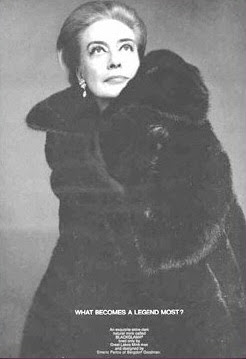 Long before the milk campaign, there was "What Becomes A Legend Most" for Blackglama mink. The long-running campaign began in 1968, the creation of Jane Trahey, a bit of a legend herself in the advertising industry, though largely overlooked by the industry today.  Named Advertising Woman of the Year in 1969 by the American Advertising Federation, Jane had a knack for catchy themelines ("Danskins Are Not Just For Dancing." and for Echo Scarves, "The Echo Of An Interesting Woman") that captured the essence of a product and gave it an irresistible appeal.

After making her mark in the advertising departments of Carson Pirie Scott and Nieman Marcus, she started her own agency, Jane Trahey & Associates and continued to make fashion and cosmetics advertising her speciality.  On the side, she wrote magazine articles and books, including the autobiographical novel that was the basis for the 1966 film, "The Trouble With Angels."

But the Blackglama ads were her most famous work.  Appropriately, the ads featured the most glamorous of celebrities, among them Barbra Streisand, Carol Channing, Lauren Bacall and Judy Garland, in photographs by Richard Avedon. Forty years later, the campaign continues.; though the legends of Broadway and film have been largely replaced with the latest supermodels. A cheapening of the definition of "legend," perhaps, but the photos remain as striking as ever.

And not a single woman with a milk moustache.
Ads Icons

Ad Broad, oldest working writer in advertising said…
Jane Trahey! I'd completely forgotten this name. Thanks for the reminder tribute and for the link where I learned she'd originated Peter Rogers' agency. Lots of advertising goodness here, I'll definitely be back.
February 8, 2008 at 9:59 PM

googiecat said…
Jane Trahey would be an interesting subject for a movie. Ahead of her time she was also lovers with the iconic fifties textile designer Tamara Keefe. They were at the top of the New York chic set . Tamara died in 1960.
November 20, 2008 at 6:06 PM