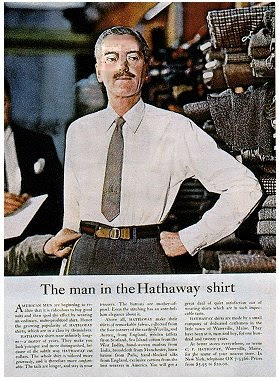 Or at least, it would be, but for the addition of-- well, see for yourself: 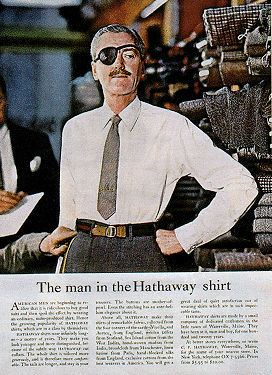 Stunning, isn't it, how just putting an eye patch on the fellow creates a stronger interest in the ad? Suddenly the man seems more mysterious, edgy, worldly. And what is it about those shirts he wears...

Creator David Ogilvy credits this "story appeal" to researcher Harold Rudolph. As Ogilvy explains in "Confessions of an Advertising Man,"

"...the more of it you inject into your photographs, the more people will look at your advertisements ... I concocted eighteen different ways to inject this magic ingredient. The eighteenth was the eye patch."

In 1952, Ogilvy confided to Time Magazine that he was inspired by pictures of ex-Ambassador Lewis Williams Douglas, who wore an eye patch after a fishing accident robbed him of the sight in one eye. The rest is history, right? Not quite:

"At first we rejected it in favor of a more obvious idea, but on the way to the studio I ducked into a drug store and bought an eyepatch for $1.50. Exactly why it turned out to be so successful, I shall never know ... What struck me as a moderately good idea for a wet Tuesday morning made me famous."

And as for the real Man in the Hathaway Shirt?

He was Baron George Wrangell, the nephew of a White Russian general working in America as a model -- his own backstory may have been as intriguing as any that eye patch suggested. (Wrangell, by the way, actually had 20/20 vision in both eyes.)
Ads creative people Creativity Icons