July 01, 2008
Around 1959, amid the first wave of "Peanuts" merchandising (whose millions in profits would forever change how the business of comic strips), Ford came to creator Charles Schulz with a lucrative offer of an annual licensing fee in return for Charlie Brown and company to serve as "spokeskids" for their new Falcon model.
Under Schulz's close supervision, Ford gave the Peanuts characters their first TV exposure in animated spots like this one from 1964:

The awkward, stilted dialogue is of course, a horrible fit with the cast, with none of the substance, easy verbosity and wit of future productions like "A Charlie Brown Christmas."  But it worked well enough to help the Falcon become a huge success for Ford.

When some newspaper industry professionals accused Schulz of excessive profiteering, he responded this way (as detailed in his recent biography):

"The duty of the comic strip is to bring readers to the newspaper as a whole... If that is not fulfilling an obligation, I don't know what is."

Apparently, however, there were limits to the type of products to which Schulz would be willing to lend his character's endorsements.  When Schulz refused an offer from Talon Zippers (maybe the punchline was just one indignity too many to inflict on poor Charlie Brown), the agency we ahead with the ad anyway, using photos instead of drawing and somehow sidestepping copyright infringement in the process: 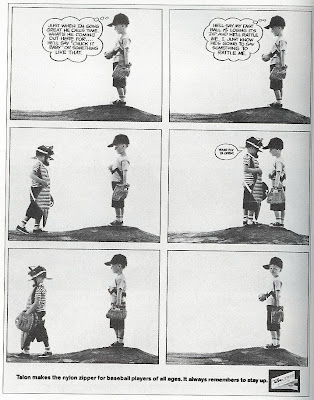 (Click to enlarge)
Interestingly, the ad first ran just a few years before this play also brought the Peanuts gang into three dimensions: 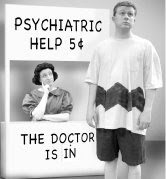 Who knows?  Maybe composer/lyricist Clark Gesner saw the Talon ad and was inspired to write 1967's "You're A Good Man, Charlie Brown."