July 15, 2008
Mangled grammar aside, you gotta give Tareyton Cigarettes 1963 campaign points for chutzpah: 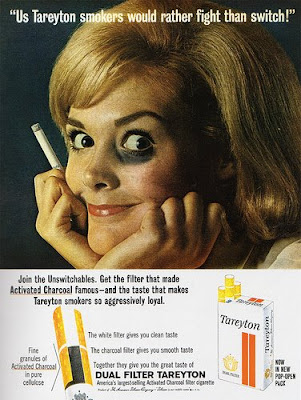 With the competition of cigarette brands heating up, Tareyton's slogan was designed to push the loyalty of their smokers. The words, though, would probably have not as been as effective had they not been accompanied by the photos of proud Tareyton smokers -- both men and women -- sporting black eyes.   (Yes, it was just makeup, but even so, looking back with forty-five years of hindsight, it's still hard not to look at the above image and think of domestic violence.  It probably occurred to some readers back then, too -- though few people probably voiced any concerns publicly.)

By the way, the same ad man who gave us this admittedly clever mnemonic -- James Jordan, who died a couple of years back -- also was behind Wisk's well-remembered (if screechy) "Ring around the collar" slogan.  Ring around the collar.  Ring around the eye.  I sense a pattern here.
TV spots turned on the same slogan but with sixty seconds to fill, the spots fall a little flat, with a lot of vamping upfront to fill time, but at least the full-throated chorus keeps it moving.  The jingle's lyrics are pretty weak, too, apart from the opening line.
<

But who am I to quibble?  The campaign resulted in robust sales.  However, thanks to the government ban on advertising tobacco products via broadcast, we were spared any further iterations of the jingle or the brand's labored attempts at humor after 1971.  But the slogan-and-black-eyes continued in print for the next decade, till declining sales put an end to the advertising altogether.
The brand's still around, though.  Given the public hostility to smoking these days, the campaign's pugilistic attitude would be particularly useful today, with just one word change:

"Us Tareyton Smokers Would Rather Fight Than Quit."

Craig McNamara said…
You're closer to the truth than you probably realize. Back in the '80s, there was an attempt to resurrect the campaign using celebrities with black eyes.
July 16, 2008 at 4:37 PM