July 18, 2008
Houses for the Atomic Age! trumpets this 1955 ad.  But are they referring to the sleek, geometric styling of era?  Not exactly. 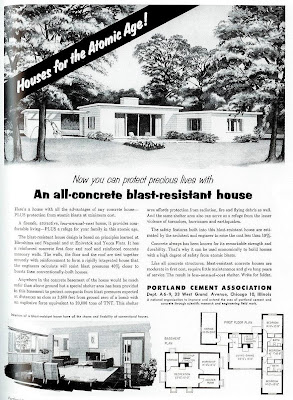 To get the full picture, read into the copy a bit:

The blast-resistant house design is based on principals learned at Hiroshima and Nagasaki...a rigidly integrated house that the engineers calculate will resist blast pressures 40% closer to bursts than conventionally built houses.

A special shelter has been provided in the basement to protect occupants from blast pressures expected at distances as close as 3,600 feet from ground zero of a bomb with an explosive force equivalent to 20,000 tons of TNT...affords protection from radiation, fire and flying debris as well.

This certainly paints a different picture of suburbia than the usual illustrations of the time:

But it's understandable, given that just underneath the surface of shiny optimism about the promise of nuclear energy to reshape our society... 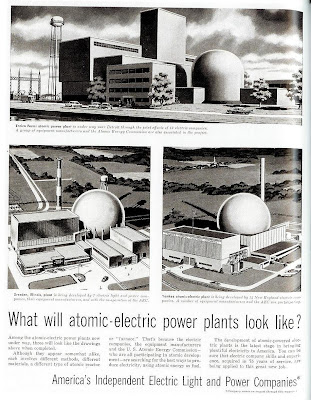 ...was the looming specter of atomic cataclysm. 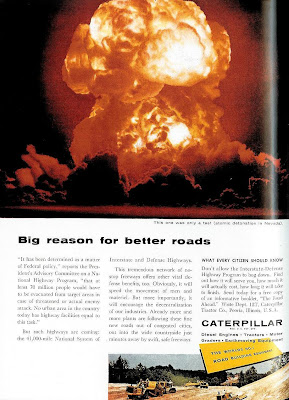 (Lest we forget, the whole purpose of the federal interstate system was to enable mass evacuation of cities in the event of...well, you know.)
Portland Cement, by the way, was originally the Edison Portland Cement Company, founded by none other than Thomas Edison in 1899.  To promote the use of cement, Edison used it to build low-cost concrete houses, though the construction never found much popularity at the time.  Apparently, he was about 50 years too early.  Portland Cement, however, maintains a web site dedicated to promoting the use of concrete in home-building; you can see it here.
Ads Culture History Marketing