Behind the Foster Grant campaign

June 26, 2008
In 1965, Foster Grant, then the leading U.S. marketer of moderately priced sunglasses, debuted the campaign that would earn it the 68th spot on Advertising Age's Top 100 Brands of the 20th century:
Although known as the "Who's That Behind The Foster Grants" campaign, that actually wasn't the headline that appeared in the ads: 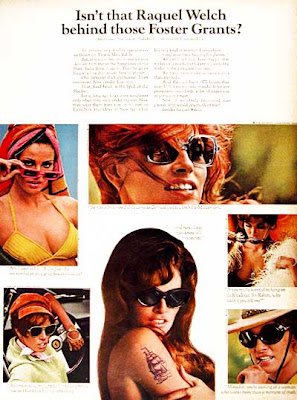 No real mystery here, is it?  But if you read the copy, you'll see that surprise wasn't really the point:

"...our Foster Grant sunglasses have done it again.  They've given Raquel a new dimension.   Several in fact.   One moment she's capricious.  Then contented.  Now candid.  Even coy."

Captions under the photos are meant to exemplify her many moods; mostly they're just silly, but the one under Raquel in a bikini top seems prescient:

"Am I doomed, C.B., to play the sex symbol in an age of flower children?"

("C.B." seems to refer to Cecil B. DeMille, the producer/director known for his star-studded "spectacle" movies and whose initials briefly became synonymous with "Hollywood Big Shot."  The real C.B. died in 1959.)

Looking back at it, the Foster Grants campaign was like a Who's Who of young up-and-comers in '60s American pop culture, with ads featuring Anthony Quinn, Mia Farrow, Elke Sommer, Robert Goulet, Julie Christie, Vanessa Redgrave and Peter Sellers (as if he need sunglasses to change his personality).  Here's one featuring the not-yet-publicity-shy Woody Allen: 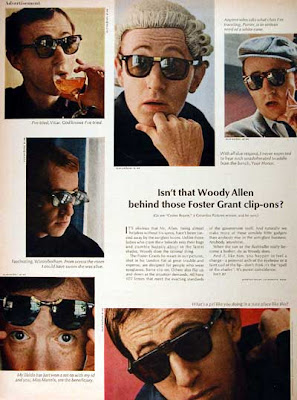 The campaign lasted in one form or another for nearly 20 years, until, spurred by falling sales, it was discontinued in 1984.  Three years later, a new campaign tried a more fashion-oriented appeal that proved no more successful at stopping the decline.

Years later, after the company changed hands a few times, the new owners of Foster Grant tried reviving the campaign in 1999, with current celebrities like the one below*.  The new versions finally used the headline as everyone always remembered it, and dropped the whole "many moods of me" thing in favor of a single glamour shot, but ultimately the revived campaign just didn't catch fire. 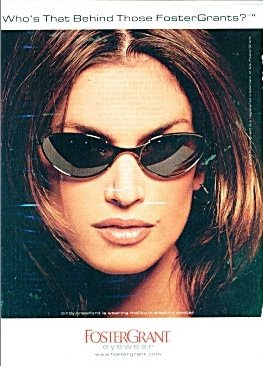 Maybe in our celebrity-saturated culture there's just no longer any mystique about celebrity sightings, especially when they're so often caught in mundane moments and desperately hiding behind sunglasses.
Going back to the well once more, Foster Grant tried again in 2007 with new TV spots that featured people changing their personalities based on the sunglasses they wore and asked the (less memorable) question, “Who could you be?  Foregoing with celebrities sounds like a fresh take, but in spirit, it's pretty close to this 1972 commercial:

(*That's Cindy Crawford, if you haven't figured it out yet.)
Ads Culture Entertainment Icons

Paul Duca said…
No, I'm sure it's Meredith Baxter (nee Birney), decades before she came out...I believe Cindy Crawford was only around 6 at the time of this commercial.
November 29, 2010 at 5:56 PM