His way for the highway

"I want to make sure that the America we see from these major highways is a beautiful America."

So proclaimed President Lyndon Johnson in 1965, announcing the America The Beautful Initiative, designed to clean up eyesores along the growing federal interstate highway system. Key to this effort was The Highway Beautification Act, which attempted to control outdoor advertising by prohibiting certain kinds of signs and regulating the places they could be posted.

As reported on the Federal Highway Administration web site:

The signing ceremony took place 2 weeks after the President had surgery to remove his gall bladder and a kidney stone at Bethesda Naval Hospital. Although he had returned to the White House only the day before, President Johnson seemed to be in an expansive mood as he recalled the drive from the hospital to the White House along the George Washington Memorial Parkway:

"I saw Nature at its purest. The dogwoods had turned red. The maple leaves were scarlet and gold . . . . And not one foot of it was marred by a single unsightly man-made obstruction--no advertising signs, no junkyards. Well, doctors could prescribe no better medicine for me."

Perhaps. But you can bet he didn't find this "man-made obstruction" offensive the year before: 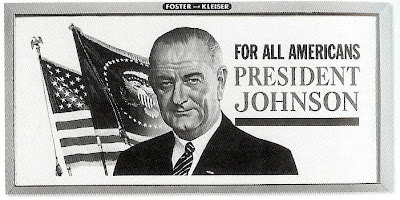