This 1950s era billboard (partially shown) for Phillips 66 is pretty typical for the era. In the decade following World War II, most advertising was still pretty unsophisticated, as advertisers slowly came to grips with a marketplace of greatly expanded buying power and increased competition.
Here, the idea of "smooth power" is illustrated by a lean swimmer, an analogy that is both vague and irrelevant. And apart from the anguish that seems to be man's expression, the billboard seems pretty forgettable.
But it got a lot more interesting when Missouri's Grand River flooded and partially submerged the billboard: 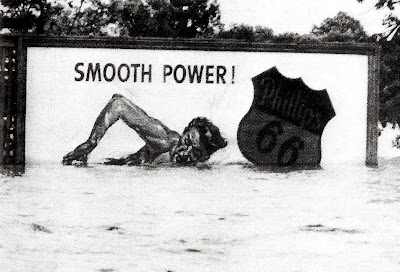 (An interesting, 100-year history of American billboards is available here.)
And in case you're wondering, Phillips named its gasoline after a 1927 test on Oklahoma's Highway 66 powered a car to 66 miles per hour; they took the identical numbers as a good omen and used a highway shield as their logo.  It lasted about 30 years in orange and black form before switching to the familiar red, white and black logo of today.