May 14, 2008
Continuing our look at some Avis' successes and misfires during the seminal years of its famous "We Try Harder" campaign. 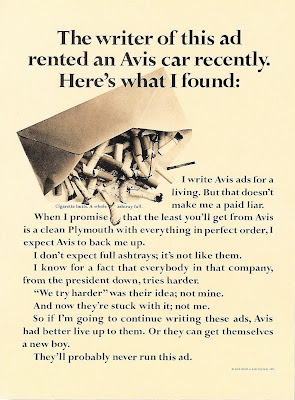 Oh, it's clever, and the copy at least stays mostly on message, and its an interesting admission that sometimes Avis does mess up, but they're trying. Kind of raising and lowering expectations at the same time. But in the end, it seems more concerned with exulting the ad writer at the expense of the client. After all, Avis is the one whose failed in their duties, but the writer refuses to be a "paid liar" and gets to lecture the client about living up to these ads. "Or they can get themselves a new boy." (Must be a junior writer. They love to get on their high horses.)

In fact, the apex of the "ads about ad guys" genre may have been this 1992 Nike ad, where the writer not only hand-lettered the ad, but used all of the copy discussing not the product, but his frustration at drawing the accompanying picture.  The term navel-gazing was coined for ads like these: 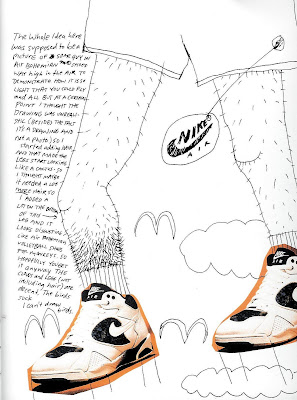 Craig McNamara said…
I was of course, making fun of the "me-centric" attitudes of junior creative people, but actually Ed McCabe was, I believe (I don't my sources on hand to double-check) the writer of Hertz's return attack on the Avis campaign (see part 5).
May 28, 2008 at 2:16 PM