May 16, 2008
Concluding our look at the hits and misses during the seminal years of Avis' famous "We Try Harder" campaign.

Throughout the initial "We Try Harder" campaign, Avis avoided any mention of who was #1 to their #2 status.  Everyone knew who #1 was, of course, and back then, it was almost unheard of for any company to name their competitors.  It may also have had something to do with knowing that, with its much larger ad budget, Hertz could squash Avis in any direct competition.
This ad, coming late in the campaign, was one of the more obvious, though still veiled, references to their larger rival: 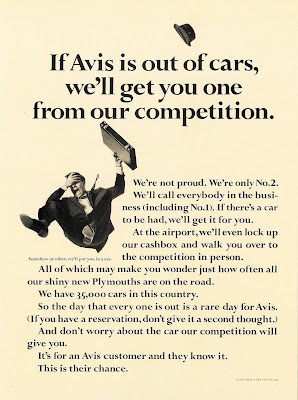 If you were watching TV back in the mid 1960s, you'd get the reference.  If not, here's a typical Hertz spot from that era.  Watch for the visual mnemonic at the end:

"I feel all we have done is awakened a sleeping giant," Japanese Admiral Isoroku Yamamoto is reputed to have said following the attack on Pearl Harbor.  Whether Hertz was sleepwalking through its advertising or not (you be the judge), it was certainly grinding its teeth over the Avis' increase in market share, gained at their expense.  After 3 years of ignoring Avis' implications that its larger rival was sluggish and complacent,  in 1966, Hertz moved its account to Ally & Gargano, a scrappy young agency that has made its name on the Volvo campaign.  The new agency's ads didn't shrink from confrontation: 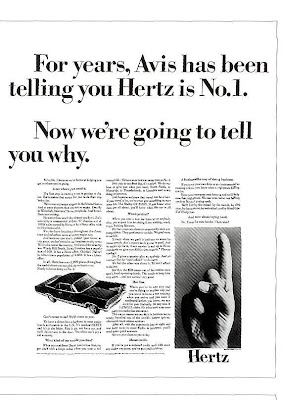 When Doyle Dane Bernbach founder Bill Bernbach saw the ad, he knew the Avis campaign had run its course.  Extolling Avis' #2 status stopped working the moment the #1 company turned the argument back on them.  DDB and Avis stuck with their campaign a while longer, trying to find an effective checkmate for Hertz's check, but by the time they ran this ad, they were pretty much raising the white flag on the entire public rivalry. 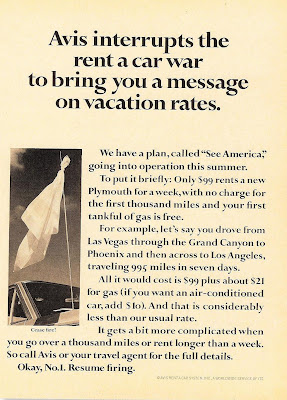 New ads were soon developed that left behind the "we're #2" strategy.  But the true heart of that classic campaign has lived on in various forms over the decades.  And ironically, it began as a heart made of cold, hard steel: 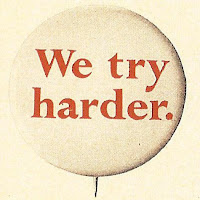 Next week:  Back to variety of subjects and ads.  See you Monday.
Ads Creativity Marketing

Anonymous said…
I just learned about this Avis ad campaign recently (I'd love to see France do a similar ad campaign referencing Italy). Interesting that Avis' new ads are a twist in the opposite direction. Dr. Tantillo did a post on this, saying that Avis has forgotten what should have been one of their central brand points - fidelity!
http://blog.marketingdoctor.tv/2008/05/08/tantillos-branding-bite-avis-ads-a-big-branding-mistake.aspx
May 18, 2008 at 10:14 AM

Anonymous said…
Nice to see the trajectory of the Avis work. I can't think of many campaigns that quit at the top of their game as it were.

Craig McNamara said…
The ads were forcibly retired, according to the Avis campaign history I read. DDB's Bill Bernbach was surprisingly nonplussed by the campaign when he presented it, and it's possible it was because he sensed how easily it could be checked by Hertz. Apparently, when Hertz finally fired its first salvo back, Bernbach raged that "This morning, they're alive and we're dead!" Well, what's the saying -- "what burns twice as bright burns half as long"?
May 28, 2008 at 2:12 PM