May 30, 2008
"Comedy is tragedy plus time." That's how Alan Alda's character explained it In Woody Allen's movie, "Crimes and Misdemeanors." As an example, he used jokes about Lincoln's assassination, but I suppose he could have just as easily used advertising's frequent riffing on the sinking of the Titanic.

That billboard, of course, more clever than disrespectful.  The Audi ad is more of the "hindsight is 20/20" genre: 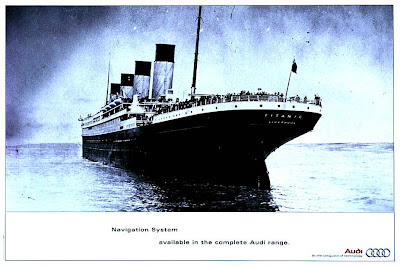 Similar to the ad above, this one from Citroen actually posits an alternate history, where the Titanic apparently avoided the iceberg and completed her journey, arriving in New York City (and thus sparing us from this overwrought 1997 epic): 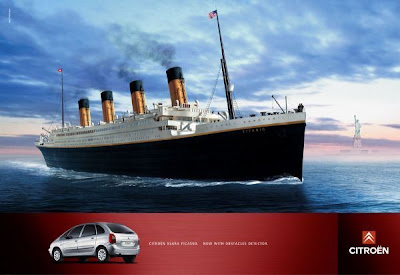 Considering the more than 1,500 people who lost their lives on that early morning in 1912, you can't help but wonder if other more recent events of such catastrophic magnitude will ever reach such iconic and desensitized status. Can you imagine the following ad, for instance, with the life-jacketed man standing near a New Orleans levee during Hurricane Katrina? Or perhaps showing a man with a parachute on an upper floor of the World Trade Center as a plane approached the building? 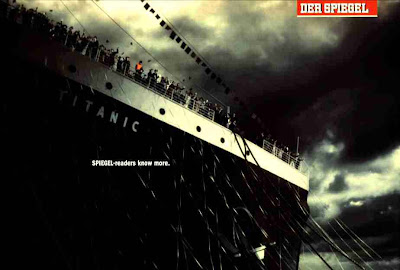 At least this ad managed to be clever and graphically involving, yet still treats the event with an ominous gravity: 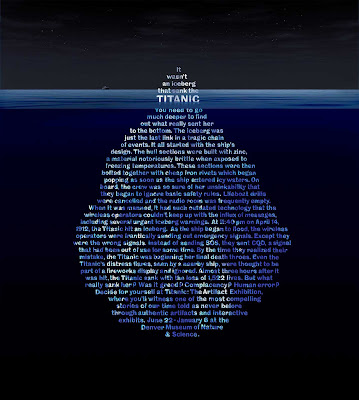