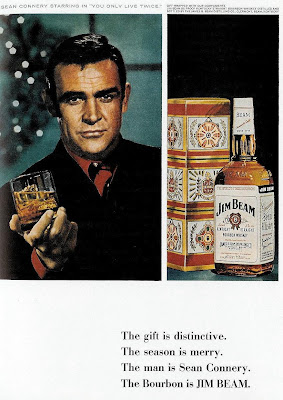 Where to begin, where to begin? How about with the awkward pairing of couplets (Should I be buying a gift for Sean Connery? Did I draw him in the Secret Santa?).   It was, apparently, an ill-advised spinoff of a previous ad:

That ad, at least has the virtue of simplicity and clarity of message.  But did it occur to anyone at Jim Beam that the adult beverage that James Bond is most associated with is the vodka martini?  In truth, according to this web site, Bond does partake in whiskey more often in several books and some of the film versions, but it's Jack Daniels or Haig & Haig -- never Jim Beam.
Still, Jim Beam is fighting the tides of pop culture if they think Bond will ever be identified with any other drink.  Thanks to the conspicuousness of Smirnoff's vodka martini -- a relatively new, and thus, exotic, alternative to the gin martini -- in the first Bond film, "Dr. No," it was pretty much enshrined from the very beginning as his drink of choice (in the movies at least, which were far more influential than the novels). The preference was reinforced in the public consciousness with the memorable "shaken, not stirred" directive that was first spoken by Bond on film in "Goldfinger."
Ads Culture Entertainment Icons Marketing

Jason Falls said…
Fun post and thanks for the stroll down memory lane. I work with Beam and hadn't seen this ad before. While there are certainly valid inconsistencies in the ad and the facts you point out in the James Bond stories, this was over 40 years ago. Thank goodness our marketing has gotten better. Would love to see what you think about our latest effort -- TheStuffInside.com.

Craig McNamara said…
Actually, when I dug into this last week, I was surprised at the relative sophistication of the marketing back them, at least in Smirnoff's use of "Dr. No" to push its Vodka martini (whether they actually paid for product placement or not). As far as having a little sport with past ads, well, I actually have more respect for a lot of the advertising of the past, for no other reason than it generally sought a more real connection to consumers, instead of just inviting to share a snarky laugh at someone else's expense. It's not my intention to be mean in my comments, just to examine the ads in the context of the times they were created.
May 28, 2008 at 2:06 PM

Anonymous said…
Also in GOLDFINGER, Bond informs that drinking Dom Perignon champagne at a temperature above 38 degree "is like listening to the Beatles without earplugs".
November 29, 2010 at 6:17 PM