The original Avis "We try harder" campaign is rightly revered among ad professionals (and consumers with long memories) for its wining combination of straightforwardness, candor, self-deprecating humor and of course, underdog determination. Even so, its easy to underestimate its impact in the marketplace, particularly its counterintuitive claim of being #2 (to the much larger Hertz) -- back in the early '60s, the prevailing wisdom was more "If you can't say you're #1, then don't say anything."

Interestingly, unlike most successful campaigns (the phrase and the button it appeared on) is better remembered than any of its executions. But as with any long running campaign -- and this one is still in use some 40 years later -- there were misfires as well as successes. Admittedly, more successes than misfires, but even the initial work occasionally less than soared.

Here's one from 1965 that, according to Avis CEO Robert Townsend, "got plenty of hate mail." 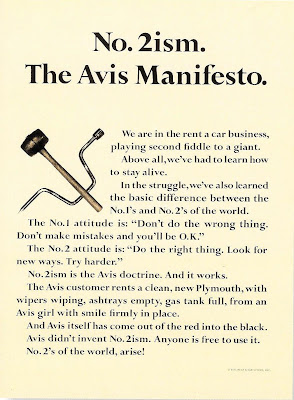 But why? The copy seems pretty uncontroversial, basically more promises of trying harder to give you clean cars, clean ashtrays and a smile from the "Avis girl" at the counter. Of course, that word "manifesto" in the headline is a bit odd, and "No. 2ism" sounds a bit like a political doctrine. And what's with the mallet and tire iron anyway? Ohhhhhhhhhh.... 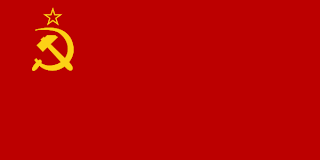 That, of course, is the flag of the former Soviet Union. And given that the Cold War was in full swing, that Cuban Missile Crisis was just three years past and the US was currently embroiled in helping the South Vietnamese fight the North Vietnamese Communist, it was a strange time to parody the hammer-and-sickle imagery and Communist revolution for your message. If trumpeting your #2 status was thought to be un-American, you can imagine how this was received by many people.

Of course, 24 years later, Mikhail Gorbachev ushered in the Soviet Union's era of "Glasnost," helping ease Cold War tensions and becoming a popular world figure. So popular, in fact, that by 1997, Pizza Hut apparently had no compunctions to starring him in a commercial that didn't just leverage his notoriety but actually presented him as a hero: